Skip to content
SAFETY ALERT: If you are in danger, please use a safe computer. In an emergency call 911 or our crisis line 1-888-554-3169. Click on the red Escape button at the top or bottom of the page or press the Esc key on your keyboard to leave this site quickly. There is also an escape link in the menu that will always be right at your finger tips. 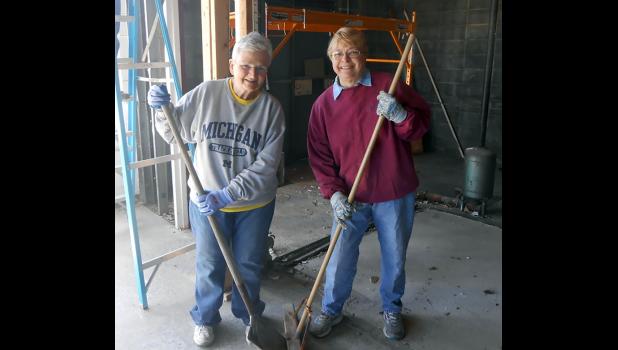 BY:
DAN SANDERSON | STAFF WRITER
A group of volunteers worked voraciously on Saturday to start a project that will repurpose a building that housed a laundromat into a store that will support the River House, Inc.’s programs provided to domestic and sexual assault victims.
River House, Inc. is a non-profit agency that serves victims and survivors of domestic and sexual abuse in Crawford, Ogemaw, Oscoda, and Roscommon counties.
“River House, Inc. has been serving local communities since 1986, by providing crisis counseling, emergency shelter, group counseling and support, as well as legal advocacy and community education,” according to its website.
The store will be located next to the Grayling McDonald’s in a building where a laundromat was shut down and has been used for storage for the last several years.
Aimee Sandula, the executive director for the River House Shelter, Inc., said opening the store has been part of the 10-year strategic plan for the community agency.
“For the last three years, we’ve been working pretty steady at scouting a location and trying to come up with funding and all that to finally make this a reality,” Sandula said.
John Cherven, who also owns the nearby Grayling Mini Mall, is donating the use of the building to the domestic violence shelter in return for building upgrades.
“It’s going to need a lot of upgrades, but it’s the perfect size to suit our needs,” Sandula said.
The River House, Inc. is still seeking some grants and donations to help with the project as well as skilled laborers and volunteers to help with construction bids, mechanical plans, and building permits.
Volunteers removed broken dry wall, lumber, and several other items stored in the building on Saturday, April 22.
“We’re hoping to make the process easier here today to get it ready and to get it down to the barebones,” Sandula said.
Carla Ott, the development director for the River House, Inc., said she was pleased with the group of volunteers that has stepped up to move the project forward.
“Between getting blueprints and getting bids and getting volunteers to help out, it’s really been a blessing to have all of this help,” Ott said.
The store will be stocked with items donated to the shelter, which can’t be displayed due to the size and security measures needed at its location on North Down River Road.
“If we could turn some of that stuff into sales, that would continue to support the programs of River House,” Sandula said.
Women and children who seek housing at the shelter would also be able to access needed items at the store for free.
A victim’s advocate will also staff the store to provide counseling and referrals for services.
“It will make it a little bit easier to come to this location than our current one,” Sandula said.
Finally, the store will serve as a place where Grayling High School students and others could take part in on the job training and complete community service.
Ott’s husband, Roger, was pleased to offer his labor of love to support the shelter’s mission.
“It’s a good idea to come and help everybody and help get this place up and running, so that can help the community  more,” he said. “It’s good to be part of that.”
Jean Tornga, the president of the River House, Inc.’s board of directors, said that gaining momentum on getting the store open will allow the agency to offer a wider array of services.
“I’m so glad that we’re finally moving ahead to do the resale shop for River House,” Tornga said. “It will help the women be more independent.”
Funding to support the shelter comes from the state and federal government, so changes in administrations can have a big impact on its budget. Three years ago, Sandula said the budget was cut by $30,000 when the state funding ax struck funding for programs.
“Every year, our budget has a slow leak, and if we don’t find a way to stop that leak, we’ll put ourselves out of business in a few short years,” Sandula said. “We need to come up with creative solutions like this to keep our programs running.”
Ott said the shelter receives no direct financial support from Munson Healthcare Grayling Hospital, but stressed that the hospital assists the agency through donations of supplies and services.
Sandula said she hopes that though the community’s support, the shelter can reach a deal to eventually buy the building from Cherven.
“This is where we hope to be,” she said.
The River House Shelter is wrapping up a busy month and will hold the 5280 Walk at 10 a.m. on Saturday, April 29.
Starting at the Crawford County Courthouse, men and women will be walking in high-heeled shoes on a mile-course, which will travel through Grayling’s downtown business district.
“Each steps counts for a mile walking,” Carla Ott said.
The event will raise funds for the shelter, as well as highlight the fact that April is designated as sexual assault awareness month.
Crawford County Undersheriff Shawn M. Kraycs will be grilling hot dogs for participants after they take part in the walk.
Posted in General

River House is a 501(c)3 non-profit organization committed to helping those in need. Your generous donations are 100% tax-deductible. Click “Donate Now”, at the bottom of the page, to make your donation securely online.